THE EXECUTIONERS WE ALL HAD A CHANCE- Event 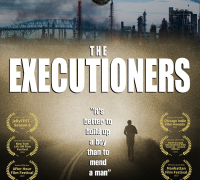 THE EXECUTIONERS WE ALL HAD A CHANCE

The Executioner We All Had A Chance, is a documentary about two men who started a boxing gym to save the young boys from the mean, gang invested streets of Philadelphia in the early 70's. In doing this they would develop some of the greatest amateur fighters world would ever have. Unfortunately life decision in the end would cost most o them their dreams of becoming Champions.
Share
Booking Closed
Back to Events List